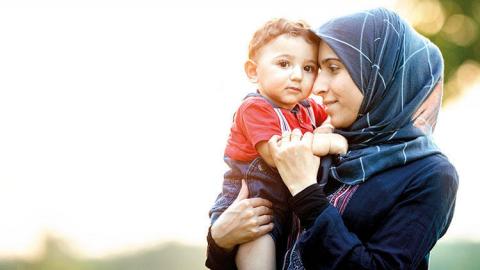 A comprehensive survey about the Syrian immigrants presented to a sub-commission of Turkish Parliament has shown that Syrians were happy in Turkey, and half of them were willing to stay rather than go back to their homeland.

According to the survey by the Migration and Integration Research Center of Turkish-German University in Istanbul, there are officially 3.6 million Syrians living in Turkey.

"Over the period of last three years, it was observed that the rate of happiness amongst Syrians in Turkey has increased rapidly," said Murat Erdoğan, the manager of the center and the author of the survey report.

"This is a tremendous transformation. It seems that they have given up hope for their country. The percent of those planning to return is just 6.8," Erdoğan stated in an analysis he presented to the parliament's commission.

As Turkey is granting citizenship rights, more and more Syrians are rooting to become Turkish nationals, according to the report.

"The number of Syrians who want dual-citizenship is decreasing. They prefer only one citizenship, and that is Turkish," according to the survey report.

Erdoğan pointed out that the mindset of Syrians has changed, highlighting, "Think about the Turks in Germany. They had a country to return to, but they did not. Syrians have no country to go, and they have set their roots here."

Erdoğan also called the situation no less than a...