Saint Simon Monastery in Hatay to host tourists after restoration 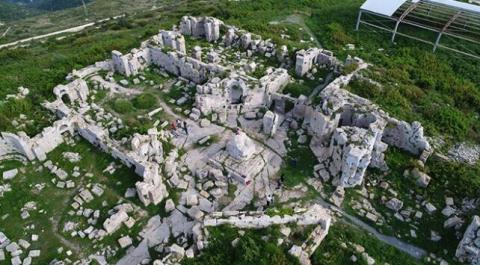 Restoration and excavation work has resumed at the Saint Simon Monastery in southern Turkey after a pause of 60 years, and the site will host tourists once it is completed.

The monastery, located in Hatay province, is believed to have been built in the 6th century by Saint Simon.

With the excavation initiated by the Hatay Archeology Museum, mosaics on the church floor depicting animals are being unearthed.

The monastery's architectural stones, some of which were destroyed due to things such as earthquakes, are also being numbered for restoration.

A team of 15 archeologists and scientists aim to unearth the church, baptistery, cistern and architectural remains inside the monastery in the 20-decare excavation area.

Ayşe Ersoy, director of the Hatay Archeology Museum, said religions, beliefs and cultures have been blended in the ancient province from past to present.

She said the Saint Simon Monastery is the wealth of the province, noting that the first excavation work was carried out by the French in the 1930s and the second excavation work by the Georgians in the 1960s.

"We are conducting new excavation to hand down the cultural assets here to the next generations. The monastery's walls, which were built with ashlar stones, were damaged by the earthquakes and have fallen prey to time," she said.

She said the other point that makes the monastery precious are the mosaics made from glass tesserae, adding they also discovered an old inscription which says 'We had this beautiful area repaired' recently.

"We are planning to carry out an excavation at the baptistery in 2021 because it is an important area that has never been opened. Our excavation work will continue, and when the restoration is...