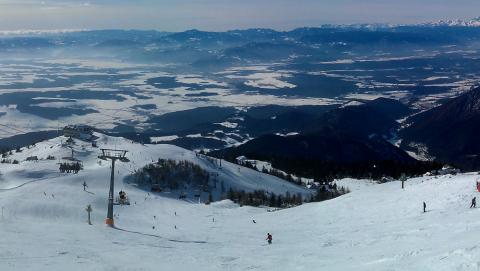 Ljubljana – The government has not yet taken a position regarding Italy’s appeal to close ski centres around Europe during the December holidays, the Economy Ministry told the STA. The ministry expects the European Commission to send recommendations for the skiing season to member states.

“The government has not discussed this issue or taken a position. We also assume that the European Commission will give recommendations based on the epidemiological situation and recommendations by medical experts, which will be forwarded to all EU members,” the ministry said.

According to Italian media reports this week, the Italian government is proposing closing all ski centres in Europe during the Christmas holidays because of the coronavirus pandemic. Reportedly, Italy is striving to achieve this in cooperation with other countries, particularly its neighbours.

The Italian government proposes ski centres open at the end of January, when the second wave of coronavirus abates and a Covid-19 vaccine should be available.

If no restrictions are introduced, especially during the Christmas and New Year holidays, a third wave of the pandemic will follow in January, the Italian government has said.

Bavarian Premier Markus Söder said on Tuesday that the German state planned to have its ski centres closed during the winter holidays, and called on other European countries to do the same.

Austria, which has been saying for months it plans to have its ski centres open while adhering to safety measures, opposes Italy’s proposal. Switzerland also plans to carry out the season.

Major ski centres in Slovenia are preparing for the season as well. Some, including Krvavec and Mariborsko Pohorje, have already started making artificial snow and selling tickets.

At a business forum organised by the business paper Finance, ski resort operators said they were worried because it was not possible to get ski resorts up and running overnight and they do not have a date when they might open.

“We’re completely helpless at this point, waiting for the state to decide,” said Manuela Božič Badalič, the chair of the Association of Slovenian Ski Lift Operators.

She was hopeful they may open on 15 December at the latest since it would be hard to make up for the revenue lost during peak ski season. And even if they open in December, “we would not be talking about profits, its about mere survival.”

If ski resorts are required to remain closed, she expects compensation from the state. “We’re not in the same position as industry, which can work anyway, we’re subject to a complete ban, without revenue and with high fixed costs.”

Janez Janša, the director of the company operating the Krvavec ski resort, lamented the lack of a clear Slovenian position regarding the Italian initiative and said he wished there was dialogue with the authorities so that solutions could be found.