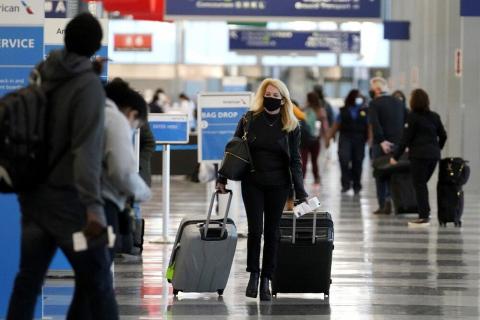 America should prepare for a "surge upon a surge" in coronavirus cases as millions of travelers return home after the Thanksgiving holiday, top U.S. scientist Anthony Fauci warned on Nov. 29.

The United States is the world's worst-affected country, with 266,831 COVID-19 deaths, and President Donald Trump's administration has issued conflicting messages on mask-wearing, travel and the danger posed by the virus.

"There almost certainly is going to be an uptick because of what has happened with the travel," Fauci told CNN's "State of the Union."

Travel surrounding Thursday's Thanksgiving holiday made this the busiest week in U.S. airports since the pandemic began.

"We may see a surge upon a surge" in two or three weeks, Fauci added. "We don't want to frighten people, but that's the reality."

The trend is ominous, Fauci and other government scientists said, with the Christmas holidays sure to bring more travel and family gatherings.

Deborah Birx, White House coronavirus response coordinator, noted a surge in COVID-19 after a holiday weekend in May.

"Now we're entering this post-Thanksgiving surge with three, four and 10 times as much disease across the country,' she told CBS's "Face the Nation."

"We are deeply worried."

"I want to be straight with the American people," he told "Fox News Sunday."

"It's going to get worse over the next several weeks."

Elsewhere, thousands of health workers marched in Madrid in support of Spain's...