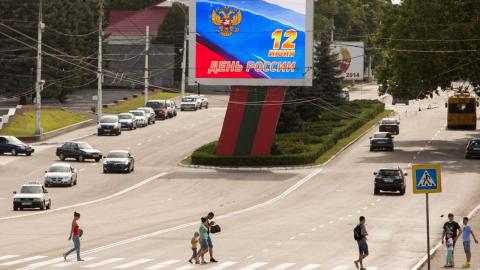 The breakaway region of Transnistria in Moldova on Sunday staged parliamentary elections for the seventh Supreme Council (local parliament) since 1992, in which only a minority of voters cast ballots.

Some 115,205 voters cast ballots which, according to the local authorities, meant the turnout was only 27.79 per cent, the lowest recorded in the history of the region. However, the election was validated after authorities scrapped the electoral threshold.

The Obnovlenie Party, led de facto by oligarch Viktor Gushan, came first in the elections. Citizens elected 33 deputies in constituencies. In about 22 of the 33, only the Obnovlenie candidate ran for the seat.

The UN does not recognise the breakaway region separated from Moldova since 1992 after a brief war, which Moscow has backed for decades while also playing the role of negotiator in the so-called 5+2 conflict settlement negotiations - comprising Russia, Ukraine, Moldova, Transnistria and the OSCE plus the US and EU.

For the parliamentary race, the breakaway region organised 256 polling stations.

The regime involved 4,000 people in the election process, according to the head of the Central Election Commission, Elena Gorodetskaya.

Local media reported that, according to the Russian parliamentarians and international observers, the elections in the breakaway region were democratic.

"Despite problematic existing circumstances, they [observers] came to Transnistria to witness democratic and open elections of deputies of all levels," the leader in Tiraspol, Vadim Krasnoselsky, said.

During the campaign, one of the current deputies, Grigory Diacenko, created a stir by setting up a group on Viber and promising chickens and roosters to the first people who joined...