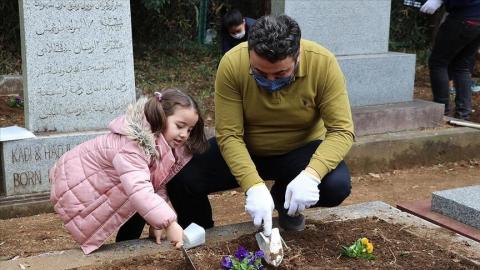 The graves of significant and historical figures buried in the Turkish cemetery in Tokyo, the capital of Japan, have been commemorated in an event conducted by Turkish embassy.

Turkish civil society representatives gathered at the Tama Cemetery in Tokyo's Fuçu district at an event hosted by Turkish embassy to pay their respects.

Muhammet Rıfat Çınar, imam of the Tokyo Mosque, read the Quran at the grave of Muslim traveler and judge, Abdürreşid İbrahim, who introduced Islam to Japan.

After cleaning the graves of other distinguished Turks in the cemetery, people present at the event then planted flowers on their graves with warmth in their hearts.

In the Tama Cemetery, besides İbrahim, there are names such as Ahmet Vahap and Ahmet Apanay, who had once served as the chairpersons of the Tokyo Turkish Association and had spent their lives in Japan.

Graves of well-known Turkish people such as wrestler Yusuf Toruko and his son, Claude Yusuf, and a popular television host, Hannan Safa, are also glorifying the cemetery.