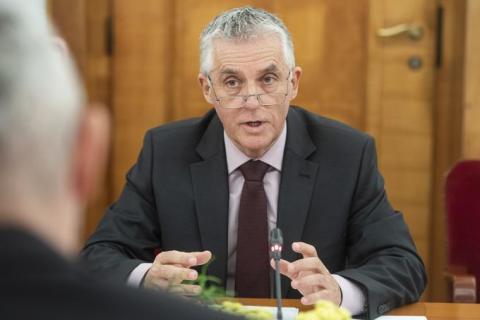 Ljubljana – Responding to claims about healthcare staff receiving only 80% of pay compensation during sick leave even in cases where they likely contracted Sars-CoV-2 at work, Health Minister Matjaž Gantar announced on Saturday that this will be remedied in the next coronacrisis stimulus package.

“Those exposed the most are definitely entitled to a full allowance,” Gantar tweeted in the wake of reports about healthcare employers’ refusal to accept the claims of staff that they contracted the virus during work and were thus entitled to full as opposed to 80% compensation.

The Healthcare and Social Care Trade Union recently warned that it was getting warnings about this from workers on a daily basis.

“There is even pressure and accusations from managements that the staff is being negligent, is spending time together during lunch and cigarette breaks inappropriately, or even that it is using protective equipment inappropriately,” the trade union wrote.

The ZZZS public health insurance fund wrote in April that in cases where Covid-19 resulting from a transmission at work is the reason for a temporary absence of an employee, this be treated as an occupational accident, which entails full pay compensation.

The trade union said that the relevant ministries had already a while ago highlighted the failure to acknowledge infections at work, which is why it was proposed for the sixth stimulus package that such sick leave allowances be covered by the state from the first day of absence onwards as opposed to only after the first month.

The package was adopted without such a solution last Wednesday, but Minister Gantar now announced a solution for the seventh package.