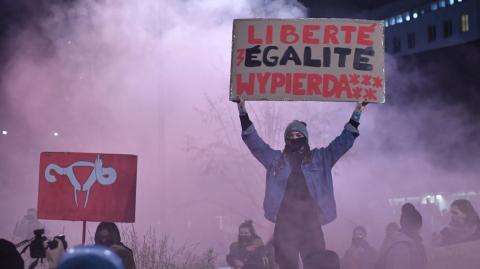 Since it took office in 2015, PiS has attempted to tighten the abortion laws several times. Protests have always broken out and proved effective in blocking the reforms from even passing the reading stage in the parliament. However, this time, politicians have taken a legislative path that will be much harder to reverse.

The new abortion limits have been applied by the Constitutional Tribunal due to non-compliance with the Polish constitution. Such a decision appears more definitive, given that the constitution supersedes all other state laws, and more problematic, as the basic bill of rights was approved in 1997 in a national referendum.

PiS leader Jaroslaw Kaczynski has taken this argument further, reminding Poles in a speech that the authors of the constitution belonged mainly to the progressive, left-wing parties that governed Poland during that time.

It is true that liberal deputies drafted the constitution and millions of Poles voted in its favour 23 years ago. But it is unlikely they would do so now, knowing its future distortions resulting from PiS's illegal stuffing of the Constitutional Tribunal with conservative judges, including its president Julia Przylebska (who Kaczynski described in an interview in 2019 as "a surprisingly nice contribution to my social life"). The ban on abortion is clearly a governmental decision that has just been outsourced to loyal judges.

People clash with the police during their protest against the tightening of the abortion law in front of the Polish Ministry of National Education headquarters in Warsaw, Poland, 23 November 2020. EPA-EFE/Radek Pietruszka Publish and be damned

The constitution states that Constitutional Tribunal...