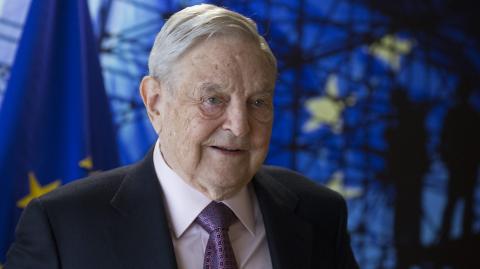 Szilard Demeter, the director of the Petofi Literary Museum and a commissioner for cultural production, wrote in an article published on the pro-government news site Origo that Europe has become "George Soros' gas chamber" and "poisonous gas flows from the capsule of a multicultural open society, which is deadly for the European way of life". Soros is a Hungarian-born US financier and a Holocaust survivor

Demeter added that Hungarians and Poles, who he claims are fighting to defend their way of life against the EU, have become outcasts and, therefore, the new Jews of the continent. As if that wasn't enough, he also compared Soros to Adolf Hitler, accusing him of being "a liberal Führer and that his liber-Aryan army deifies him more than did Hitler's own."

The opinion piece made headlines in the Hungarian media over the weekend, prompting writers and opposition politicians to call for his immediate resignation. Finally, Demeter grudgingly retracted the article in a Facebook post, saying he did not mean to "relativise the Holocaust", but stopped short of actually apologising.

Jewish organisations and the embassy of Israel were outraged and protested against the piece. The US embassy in Budapest also condemned the op-ed and wrote that there should be no tolerance for Holocaust relativisation or minimisation of any kind.

The scandal resurrected the debate about antisemitism in Hungary. Prime Minister Orban and his Fidesz party have been fighting accusations of antisemitism for years. In their defence, they cite figures that show incidents of violence or harassment against Jewish people are much less common in...