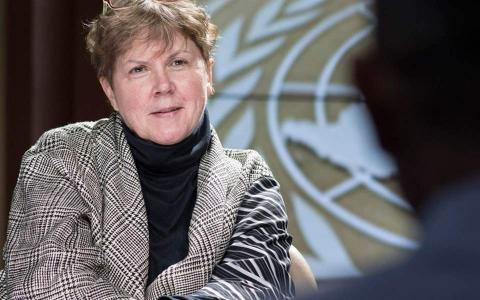 The United Nations special envoy for Cyprus, Jane Holl Lute, arrived in Nicosia on Sunday night for a series of meetings aimed at restarting reunification talks, following the change in leadership in the Turkish-occupied north of the divided island.

Lute will meet with recently elected Turkish-Cypriot leader Ersin Tatar, a right-wing hardliner who advocates the island's partition, and then with Cyprus President Nicos Anastasiadis later in the day on Tuesday.

On Monday, she will be meeting with the UN's special representative in Cyprus, Elizabeth Spehar, and the rest of the UN team on the island.

Lute is due to fly to Athens on Wednesday to meet with representatives of the government of Greece, one of the three guarantor powers in Cyprus. It has not been confirmed whether she will also fly to Ankara for talks with Turkish government officials.