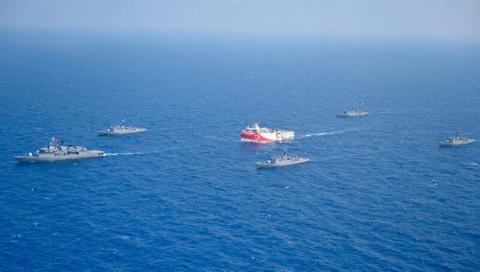 Germany on Nov. 30 welcomed the return to port of Turkish research vessel Oruç Reis after completing its energy exploration mission in the Eastern Mediterranean.

Speaking at a virtual conference on Germany's EU presidency, Merkel said relations with Turkey, and recent tensions in the Eastern Mediterranean, would be among the major topics of the EU leaders summit on Dec. 10-11.

"It's a good signal that Oruç Reis now has returned to a Turkish port," she said, but also expressed regret that they couldn't achieve much progress in the past two months in decreasing tensions and overcoming differences between EU members and Turkey.

"We have put a great deal of effort into EU's relations to Turkey. But there are many different obstacles and difficulties that reoccur again and again," Merkel said.

"Now, we need to see how the discussion goes in December. But I should say we haven't made as many headways as I would have hoped," she added.

Following their summit in early October, EU leaders had reiterated the bloc's solidarity with EU members Greece and the Greek Cypriot administration and called on Ankara to take steps to de-escalate tensions in the Eastern Mediterranean.

They also agreed to re-energize EU-Turkey relations by launching a "positive agenda" with specific emphasis on modernizing EU-Turkey customs union, enhancing trade and economic ties, cooperation on migration and other issues of common interest.

Amid recent tensions in the region, Greece and the Greek Cypriot administration have increased their pressure on other EU members to impose sanctions on Turkey during the upcoming EU leaders summit.

The EU's current term president Germany, and majority of EU members have been reluctant so far to take such...