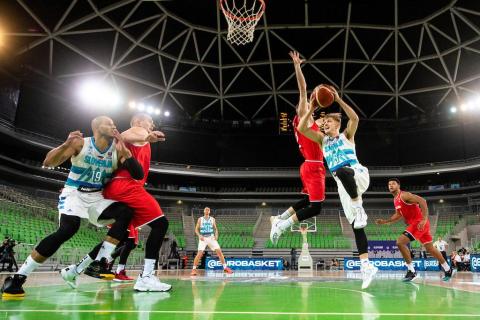 Ljubljana – The Slovenian men’s basketball team has qualified for the 2022 Eurobasket with wins against Ukraine and Austria in a mini “bubble” tournament held in Ljubljana’s Stožice Arena as part of the qualifying Group F. Slovenia will thus be defending their gold medal from the previous European championship in 2017.

Playing without its NBA and EuroLeague players, Slovenia defeated Ukraine (84:73) on Saturday and Austria (77:64) on Sunday to secure a berth at the European championship, to be hosted by Germany, Italy, Georgia and the Czech Republic.

There are two games to go for Slovenia in Group F, which also features Hungary, but the national team has three wins in four matches in the qualifiers to sit firmly atop of the group. The last two matches are scheduled to be played in February 2021.

Slovenia all but secured a berth at the EuroBasket before Monday’s match between Ukraine and Austria, and only needed Ukraine to win to make it. Ukraine did the favour by beating the Austrians 70:67 in the last match of the Ljubljana bubble.

The tournament was supposed to also feature Hungary, but their matches have been postponed due to several positive Covid-19 tests by Hungarian players.

Modelled after the National Basketball Association’s (NBA) isolation zone in Orlando, Florida, Ljubljana hosted the mini tournament in Stožice Arena in cooperation with the nearby Austria Trend Hotel.

It was to be one of the eight bubbles in Europe organised under the auspices of the International Basketball Federation (FIBA) to continue the qualifiers for the next EuroBasket, scheduled to take place on 1-18 September 2022.

In the Ljubljana bubble, Slovenia were led by new head coach Aleksander Sekulić, who recently took over from Radovan Trifunović, who parted ways with the KZS at the end of March.

Sekulić was satisfied with his team’s play in the bubble. “We showed maximum effort and we were fully dedicated to the goal. We were lucky that the lads know each other well and that they know how to function as a true team.”

The team was captained by Edo Murić, the player who has earned the most caps in the national team among all players who took part in the tournament, who said that the two wins had come as a huge relief.

“It was crazy back in February. This time we showed true energy, although it is not easy to play two games in two days, especially against physically strong opponents. We are the best team in our group and we need to prove this next February.”