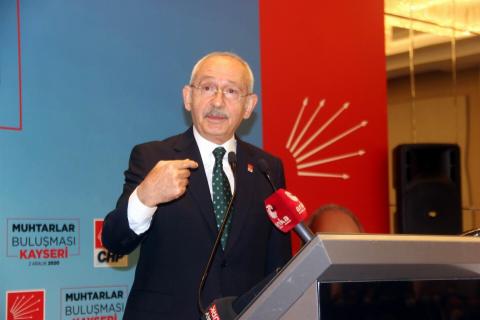 The lawmakers should attend the funerals of the terrorists, the head of the Republican People's Party (CHP) has said, referring to some members of the parliament from the ranks of the Peoples' Democratic Party (HDP) who in the past had attended the ceremonies held for the PKK terrorists.

"I do not support the participation of the executives, MPs and heads of the provincial organization of any political party to the funeral of a terrorist. It's not right. My understanding of nationalism is patriotism. I love my country and my flag," CHP Chair Kemal Kılıçdaroğlu told the mukhtars (heads) at a meeting in the Central Anatolian town of Kayseri on Dec. 2.

Kılıçdaroğlu referred to some of the HDP lawmakers whose participation at the funerals of the PKK terrorists have caused controversy in Turkey. The HDP is often criticized for not being able to put a distance between the party and the PKK and for failing to condemn the PKK's terror acts.

The PKK is designated as a terrorist organization by Turkey, the United States, and the European Union.

The CHP leader made this statement after some participants argued that CHP MP Sezgin Tanrıkulu had attended the funeral of a terrorist. Denying the claims, Kılıçdaroğlu has informed that the funeral that Tanrıkulu attended was the funeral of slain human rights activist and lawyer Tahir Elçi in Diyarbakır.

A photograph that has been circulating depicting Tanrıkulu as attending the funeral of a terrorist is fake, Kılıçdaroğlu said, recalling that the CHP had always condemned terrorism even when he was serving as the head of the Diyarbakır Bar Association before joining the politics.

The CHP leader has asked the heads to question the economic performance of the government, specifically the cost,...