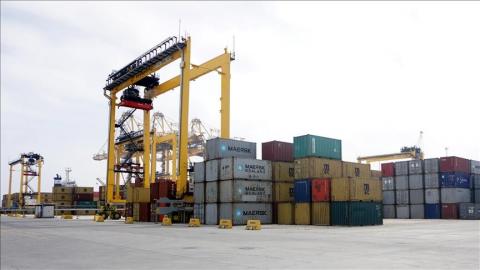 The innovation of Turkish overseas logistics centers will ensure the rapid flow of exports and products' penetration of international supply chains at low cost, thus serving sustainable export growth, according to an expert.

Erkeskin said the centers will enhance Turkey's export performance in strategic regions such as Africa, the Americas, Europe, Russia, and the Far East.

Citing a decree by President Recep Tayyip Erdoğan this October on government support for logistics centers, he noted that some expenses of these centers would be supported by the country's Trade Ministry for five years.

"We target the countries where our exports have deep growth potential," Erkeskin said, stressing that they would first open in countries with relatively less logistics infrastructure.

The first continent that stands out is Africa, he said, adding: "Our first focus will be countries such as Ghana and Nigeria, where there are major bottlenecks in logistics infrastructure despite their great market potential."

"Since they have a habit and taste for Turkish goods, we can achieve permanent export improvement here."

Cost advantage in Europe, US, China

Countries with developed logistics systems, like the U.S., U.K., Germany and China, are also included in the initiative, Erkeskin said, adding that Turkey could gain an advantage via incentives provided by those countries and the efforts on special commodity groups.

"If we obtain a cost advantage in those countries and boost our competitiveness, we'll...