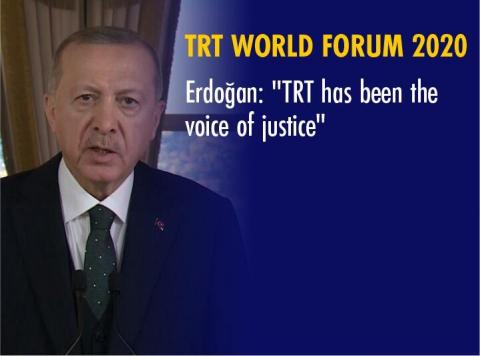 President Erdoğan gave his keynote speech at TRT World Forum 2020 under the theme 'Shifting Dynamics: The International Order in a Post-Pandemic World', held on December 1- 2.

While delivering his speech via teleconference, which was held virtually this year, Erdoğan said that he sees the Forum as providing grounds for effective discussions for the world, the region and the country. Voicing his hope for the Forum's success, Erdoğan indicated that many significant topics including digitalization, technology, trade and conflicts in Syria, Yemen and Nagorno-Karabakh will be discussed during the two-day online sessions and congratulated the TRT administration.

Expressing that the coronavirus pandemic left a deep imprint on every aspect of our lives, Erdoğan further stated that with the pandemic: "We are required to making substantial changes in our personal relations, economy, shopping methods and in many other areas. We see that media, politics and international relations have also been influenced by this wave of change. New media tools, which have been on the rise for a while, have become more widespread during the pandemic.

Digitalization has started to stand out in media as well as in trade. Of course, we cannot say that traditional media has completely lost its influence. However, we cannot deny that we are dealing with a new reality. I believe that the discussions to be held by the experts at TRT World Forum will draw new horizons for us." "It is disgraceful how media outlets continue to be the standard-bearers of anti-Islamism and xenophobia."

Referring to the glorification of members of separatist militant groups, which were responsible for the deaths of hundreds of thousands of civilians in Syria, in Western magazines, Erdogan said...

Biden seeking to turn the page in ties with Turkey, says Kalin