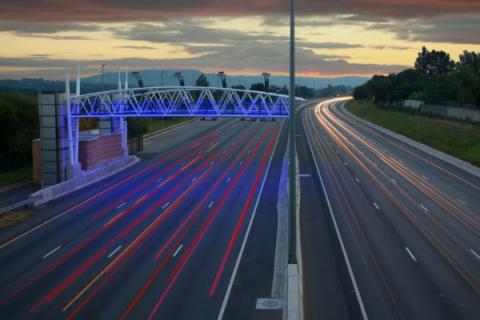 Ljubljana – The state-run motorway company DARS has received three bids in response to a tender to set up a system for electronic tolling of cars, which is to become operational in December next year. The lowest bid was submitted by the Slovenian company Iskratel in partnership with Hungarian ARH Informatics.

Iskratel is offering to put the system in place at the cost of EUR 14 million, Slovakia’s Skytoll made a bid of EUR 15.7 million and a group of the Slovenian telecoms provider Telekom Slovenije, postal company Pošta Slovenije, ICT company Marand, in partnership with Austria’s Kapsch are bidding at EUR 33.4 million.

DARS said it would now conduct due diligence of the bids. “Our goal is to close a contract by the beginning of February next year,” the company told the STA.

In an interview with the newspaper Delo, Iskratel CEO Željo Puljić said they were offering established technology that works well in Hungary, that is a system that can read car number plates and recognise the shape of the car.

The paper writes that it follows from Erar, the online app tracking financial transactions made by public institutions and state-owned companies, that the Hungarian ambassador had been lobbying with DARS for the public tender to be changed to be acceptable to the widest possible range of bidders.

According to Delo, the public contracting documents have been changed once since that contact, however DARS explained for the paper that the documents were not changed due to the ambassador’s position.

“The public procurement call has been changed in small part only based on questions from various potential bidders received through the public contracting portal, while key technical requirements and demands for references have remained the same.”

The legal basis for the introduction of e-vignettes was passed by the National Assembly in late October in the form of an amendment to the motorway tolling act.

The new system will involve cameras recording car registration plates and the DARS surveillance mechanisms will monitor who has paid for the vignette and who has not. When they have, the data will be erased immediately, if not, they will be erased at the end of the fining procedure.

These categories will remain unchanged, the difference to the current system being that electronic vignettes will be valid from the day of purchase for the designated period. The current annual physical stickers that are valid up to 31 January following the year they are valid for.

The purchase of a-tolling stickers will be possible via a mobile app, online or at service stations. The Infrastructure Ministry says the prices should remain the same. The annual sticker for cars is now EUR 110, the monthly EUR 30 and the weekly EUR 15.

Electronic tolling of lorries has been in place since April 2018, but using a different system, based on the number of kilometres driven on motorways.

Bulgaria Again Ranks Among Most Corrupt Countries in Europe

Health workers may be spectators at Biathlon Pokljuka

Report: Matej Tonin to temporarily take over at Health Ministry