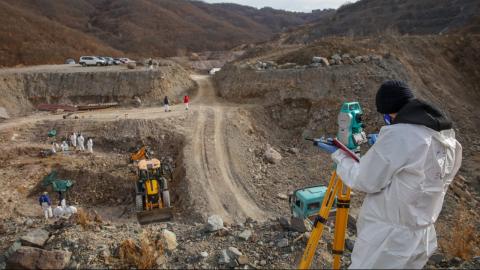 There are no road signs pointing to the mine, which is surrounded by forests and fields. Nor are there many houses on the way. But Kizevak is currently a hive of activity.

More than two decades since the 1998-99 Kosovo war, the mine last month gave up another gruesome secret of the conflict when investigators uncovered the remains of what are almost certainly Kosovo Albanians killed by Serbian forces and tossed into a mass grave to hide evidence of war crimes. Now, police secure the site and local and foreign experts inspect the ground.

It is the fifth mass grave found in Serbia since the fall of strongman Slobodan Milosevic in 2000, a little over a year after NATO bombs forced him to withdraw from Kosovo following a brutal counter-insurgency war. The remains of more than 900 Kosovo Albanians have been found so far, yet no one in Serbia has been held responsible for what was a systematic effort to conceal evidence of war crimes.

The process of exhuming the remains began on November 30, marking the climax of five years of painstaking research based on witness accounts and aerial images.

Representatives of Serbia, Kosovo and a number of international bodies visited the site on Friday. "Some 240 cubic metres of stone has been dug up at this location," said Veljko Odalovic, head of the Serbian Commission for Missing Persons.

"In the coming weeks, following the joint hard work of the forensic team, more families will be able to close a very dark chapter in their lives," said Fabien Bourdier, president of the Working Group on Missing Persons at the International Committee of the Red Cross, ICRC.