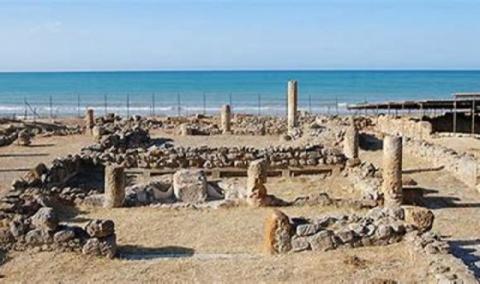 Excavations of the Roman villa near the village of Dolna Kremena (Mezdra region) began in 1972, as a statue with two faces (the so-called Hermi- after the god Hermes) was discovered here. It is established that this is a classic-style villa with a rectangular plan and three wings, located around a large courtyard with a total area of 1340 sq.m.

This is the earliest type of Roman villas discovered in Bulgaria. The villa was studied in 1974-1981 by archaeologist from the Vratsa Museum, Spas Mashov. It was located on arable land and is therefore is badly destroyed. The stones have been plucked out for years, and the locals have been taking bricks and tiles from here.

The villa is located near a water source, on a south-facing hill. Nearby there are fertile farmlands and a large settlement center (the Roman city under modern Mezdra). Perhaps the villa was also located on a central Roman road, which passed by Mezdra and led to the big Roman city of Escus (at the mouth of the Iskar River, the present-day village of Gigen).

This is evidenced by two milestones (road signs), one found at Mezdra and the other at the village of Bodenets - only 3 km away from the villa.

The villa is a rectangular building with rooms located around a central courtyard. From the north and west, the premises were opened to the yard through covered corridors with colonnade (the so-called portico with peristyle).

During the excavation, parts of the remarkable architectural decoration of the colonnade were discovered. The columns were decorated with embossed ornaments. A whole basrelief featuring Aphrodite with a dolphin is preserved. Columns tops were decorated with with Corinthian-ordercapitols with Acanthus leaves. Partition plates were probably placed between...