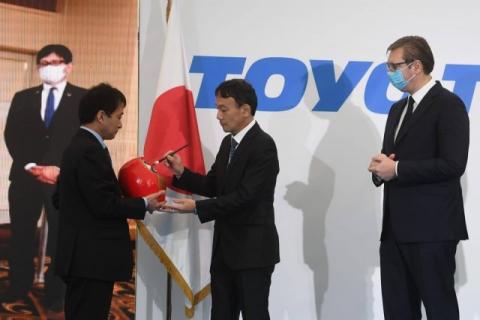 It is one of the world's largest tire companies that will construct and operate a new tire manufacturing plant in the Northeast Industrial Zone of the municipality of Indjija, two kilometers from the city center.
Today, at the ceremony of laying the foundation stone for the plant of the Japanese Toyo Tires in Indjija, President Aleksandar Vui pointed out that this is an investment of great importance, and that the company will be one of the largest exporters from Serbia, pointing out that the company's exports will reach € 240 million.
"Exports of Toyo Tires will be at the level of 240 million euros, and that will be one of the most important and most powerful exporters from the territory of Serbia," Vucic emphasized.
He says that these are huge incentives for the development of the Serbian economy, but it is even more important that, after this investment, we expect the arrival of new Japanese companies.
"This is an important thing for Serbia, of great importance," Vucic emphasized.
He specified that this is an investment of 382 million euros, which is the largest Japanese investment so far in Serbia, for which he is grateful to everyone in Japan who worked on it, as well as to everyone in our country who, in fierce competition, managed to fight for a large and powerful company.
"It is not a question of one or two meetings, we started negotiations in May 2017. Talks and negotiations lasted for three and a half years to bring this giant to Serbia, to have such an important investment for Indjija, Vojvodina and the whole of Serbia," he said.
He told the citizens of Indjija that "their future is guaranteed" with this factory.

We have not threatened with a nuclear war

Japan votes for key election in shadow of Abe assassination