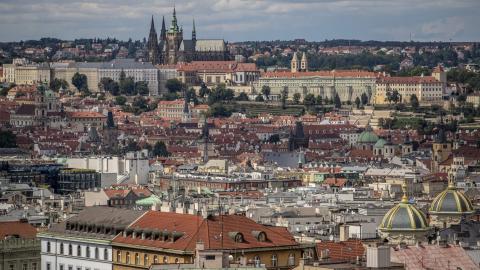 Czechs seeking to buy an average sized apartment of 70 square metres faced paying over 11 times their annual salary in 2019, more than their peers in any other European country. That's a ranking they enjoyed for a fourth straight year. In the capital Prague, the average price per square meter rose to €3,395 last year, far above regional peers such as Budapest and Bratislava.

In September, a new apartment in the capital cost an average of 8.45 million koruna (about 320,000 euros), according to The Prague Institute of Planning and Development (IPR Prague). That's around 1 million koruna higher than in 2019, the city-funded spatial planning body said, noting that "prices have not fallen despite the pandemic."

Martin Lux, who heads the Department of Socio-Economics of Housing at the Czech Academy of Sciences, says that the COVID-19 pandemic has, in fact, had the opposite effect, with already red-hot demand rising further. The effect was so pronounced that even as the economy juddered to a halt during the lockdown in the second quarter of 2020, the average house price rose by 3.5 per cent, setting a new 12-year record.

Some insist that boosting supply will help slow the price rises, and they hope relief may be on the way by doing away with the red tape that limits development. The government could be about to open the floodgates with a new building act.

The process for getting a permit to build new housing is commonly blamed for the crisis. Demanding bureaucracy makes the Czech system one of the most onerous in the world. According to the World Bank, the Czech Republic ranks 156th in...