"Your return is one of the best news for Serbia" PHOTO 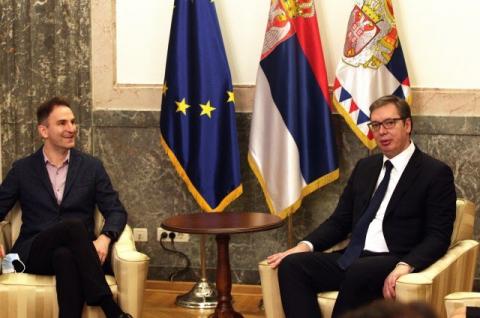 "Your return is one of the best news for Serbia," Aleksandar Vui wrote to us on the "Buducnostsrbijeav" account on Instagram.
The star of the world classical music scene, violinist Stefan Milenkovi, said that after 30 years of international career, he continues his life in Serbia as a professor at the Academy of Arts in Novi Sad, thanks to the national platform "Serbia Creates" under the auspices of Serbian Prime Minister Ana Brnabi.
Milenkovi is the creative ambassador of the national platform "Serbia creates" and his engagement in Serbia will be mostly related to Novi Sad.
"I will open a new concert hall in Novi Sad on January 13 with a streaming concert. I am happy for my pedagogical work with talented young people in Novi Sad. I will do my best to contribute as much as possible to the Novi Sad 2021 European Capital of Culture Foundation. I am also thrilled to be closer to Serbia with my wife and child", Milenkovi said last night in Dnevnik 2 of RTS.
Milenkovi started his career very early, performing with his first orchestra when he was only 6 years old. At the age of 10, he played at a Christmas concert in Washington, USA, for the then US President Ronald Reagan, and later his concerts were attended by Mikhail Gorbachev and John Paul II, among others.
Deeply committed to international humanitarian action in 2002, he received the "Lifting up the World With One Heart" Award for humanitarian activities. He has participated in numerous gala concerts under the auspices of UNESCO in Paris, with artists such as Placido Domingo, Lauren Mazel, Alexis Weissenberg and Yehudi Menuhin.
During the war in the early 1990s, he was the first children's ambassador to the Balkans. He is also dedicated to pedagogical work, in collaboration with...