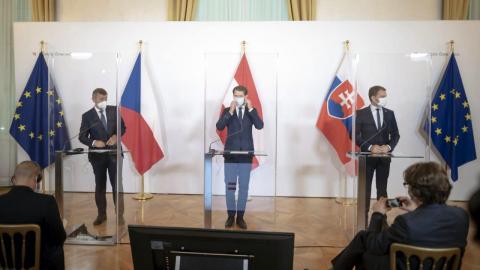 In a joint statement, the two states on Thursday said they would not endorse the recently amended draft on EU Enlargement Conclusions, intended to appease Bulgarian demands toward EU hopeful North Macedonia, as it contained elements that further complicated the enlargement process.,

The draft was supposed to be adopted at the Council of EU Ministers on Thursday.

"We were unable to give our consent to the draft presented for approval," the joint statement read. "The text … contained elements, including the notion of falsifying history, that in our view would be hugely detrimental to the enlargement process and could potentially bring about further complications," they said.

"We will not allow the [European] Union to be the judge of our shared history, how we identify ourselves, or the language we use. These issues belong to the parties concerned and we are here to support them," they concluded.

The disputed sentence that has alarmed Prague and Bratislava suggests EU candidate members could in future be judged also on whether they had falsified or wrongly interpreted their history.

The sentence was inserted on the insistence of Bulgaria, which last month blocked the start of North Macedonia's EU accession talks, accusing its neighbour of falsifying its own and Bulgarian history. Bulgaria, which long laid claim to Macedonia, also disputes the existence of a Macedonian language, separate from Bulgarian.

The sentence was inserted as a last-ditch effort by the outgoing German EU presidency to find a compromise that would nudge Sofia into unblocking...