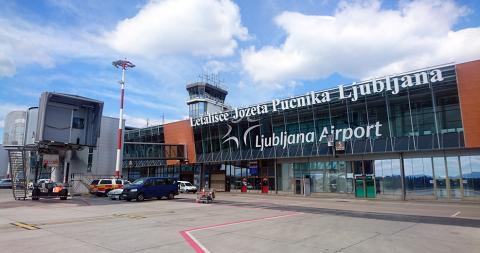 Brnik – Although regular passenger transport at Ljubljana airport has been slashed because of the epidemiological situation, Fraport Slovenija director Zmago Skobir remains optimistic. He is confident the airport will come to life again in the spring.

The total passenger figure for this year is expected to stand at 300,000, while 1.5 million passengers had been expected. This will of course reflect on the business results. The damage because of coronavirus has been estimated at almost EUR 17 million.

“We started lowering costs and delaying investment immediately in March with the exception of the construction of the new terminal. The owner has been very sympathetic, having left the accumulated profits from past years in the company.

“The EUR 24 million, which was also intended for the construction of the terminal, is what the company currently lives off, but because of the size and complexity of our operations we have great needs and the funds will be gone soon,” Skobir said.

Fraport Slovenija has thus turned to the state for help and the response was positive. But the EUR 5 million it is to receive must first be approved by the European Commission. “This aid will be very helpful so we won’t be forced to continue with drastic cost cutting and will be in good shape when transport is relaunched.”

The promised state aid would secure liquidity for the next three months, as the minimum monthly costs of the airport operator range from EUR 1.5 million to EUR 2 million.

The company is also working to secure a loan just in case. But Skobir is counting on the situation improving significantly in May or June as a result of vaccination and a new standardised travel procedure highlighting safety measures.

Airports and airliners are preparing to be able to conduct additional measures to prevent the spread of infections. At Brnik airport, an area for Covid-19 testing will be set up, as some countries will demand a negative test upon entry.

Skobir does not expect Slovenia’s EU presidency in the second half of 2021 to have any major impact on passenger numbers as during the 2008 presidency, because now many meetings and a lot of business communication have moved online because of the epidemic. He does not expect mass events any time soon even if restrictive measures are lifted.

Skobir is counting on tourists rather than business travellers.

But the airport is still working on having the new passenger terminal ready for the EU presidency. The construction that started in the summer of 2019 is going as scheduled.

The airport operator expects 700,000-800,000 passengers next year, and more air carriers. In normal circumstances, there would be 17 airliners operating at the airport now. However, now there are only three, flying to Belgrade, Istanbul and Frankfurt.

Skobir finds it crucial that no carrier had cancelled flights to Ljubljana, but merely postponed them, as Slovenia remains an interesting destination. State subsidies for air carriers ready to fly to Ljubljana in the coming months were also warmly welcomed, he said.

Fourteen airliners are already selling tickets for their planned flights to Ljubljana. However, smaller planes will fly to Ljubljana at the beginning of next year, and there will be fewer connections. Skobir expects it will take at least two to three years before air traffic returns to pre-corona level.

Fraport Slovenija is trying very hard to have one major carrier set up its base at Brnik airport, which would reflect in very good connections provided by that carrier. “Talks on this are under way. There are many possible models of cooperation …,” he said.

The concept is not very far from having a renown foreign carrier flying with Slovenian crews and possibly under Slovenian flag, Skobir said, adding this would make more sense than founding a new national air carrier after the collapse of Adria Airways.

But pay restrictions, including concerning bonuses and promotions, remain in place. The company is also using the furlough scheme.

After going through the costs, and after a contract expired with a cleaning company, the company decided to do the cleaning alone. Thus, eight people who were laid off in the summer were hired again. “The people were willing to take on jobs with lower pay, because they hope to get their old jobs back when things return to normal.”

Meanwhile, about 70% of the staff have been active throughout the epidemic in general aviation activities and cargo transport, two areas which have not been affected so much.

Cargo transport has seen a 10% drop compared to last year. Logistic companies operating around the airport are also doing well, so the interest in Fraport Slovenija’s plots there is huge. Parcel delivery company DHL is among those planning to expand.

He said the airport had space and cooling chambers for pharmaceutical products but did not have the capacities for storage at -70 degrees Celsius, which is required for one of the vaccines.

Since there are not many landings and takeoffs at Brnik, about 20 planes are parked at the airport now, of which some are waiting for maintenance at the companies Solinar and Adria Tehnika. “When there will not be enough space for parking and air traffic, this will be a sign that the worst is over,” Skobir said.

Orders received for over 2,600 jabs for matura students, staff