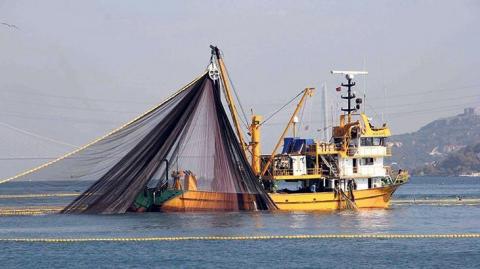 The report named the "State of Mediterranean and Black Sea Fisheries" (SoMFI 2020) underlined that Turkey, along with Tunisia, Italy, Greece, Egypt and Algeria dominates the sector.

"The fishing fleet in operation in the GFCM area of application [the Mediterranean and the Black Sea] in 2019 consists of 87,600 fishing vessels and a total fishing capacity of around 903,000 gross tonnage," said the report.

"Four countries, Turkey, Tunisia, Greece and Italy, account for around 60 percent of the total fishing fleet," it added.

The report also noted that Turkish fishermen changed their route to the Mediterranean to catch fish.

"In the Mediterranean, the largest increase in catch since 2016 was shown by Turkey with a 20.4 percent jump, while the greatest decrease was shown by Morocco," said the report.

In the Black Sea during the same period, Georgia and Romania showed the most evident increase, whereas "Turkey's contribution to Black Sea landings decreased by around 13 percent."

Turkey is also a dominant country in the socio-economical side of the fishing sector.

"Total revenue from marine capture fisheries in the...

In Athens, a regional alliance is taking shape

Dendias meets with foreign dignitaries ahead of forum