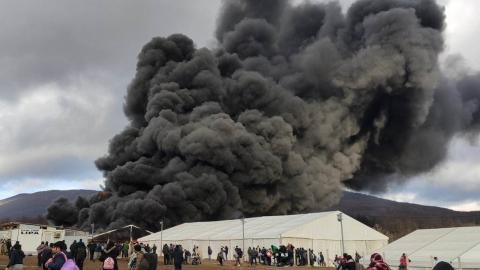 The troubled Lipa migrant and refugee camp near Bihac in northwest Bosnia was set on fire on Wednesday as it was due to close.

The camp has been at the centre of a battle between the local authorities and the International Organization for Migration, IOM, which has long threatened to close the camp if the authorities do not improve winter conditions.

The migrants were given breakfast and necessities on Wednesday morning and the tents began to be gathered when the fire broke out, the IOM told BIRN. Flames destroyed three large tents for migrants but also a lot of other facilities.

The head of the IOM for Bosnia, Peter van der Auweraert, posted on Twitter that fortunately there were no casualties.

"We are not sure what the extent of the damage is, we know that the fire started from the accommodation part. As we can see, the tents are still being set on fire and I think it is vandalism," Natasa Omerovic, coordinator of the Lipa camp, told the Bosnian media.

According to the IOM, most of the infrastructure has been either destroyed or damaged.

The camp was supposed to shut last week, but closure was postponed after the Bosnian authorities promised to improve conditions for some 1,300 migrants staying at the camp.

Migrants leaving camp Lipa before it was set on fire, Photo: EPA/Migrants

On Monday, the Bosnian government agreed to prepare Lipa for winter by setting up containers and bringing in electricity and water supplies, which it promised to do in April, when the camp opened as an emergency response to the COVID-19 pandemic, to get all migrants and refugees off the streets.

On Tuesday, the government ordered the reopening of the Bira reception centre in Bihac itself. Migrants from Lipa were be...