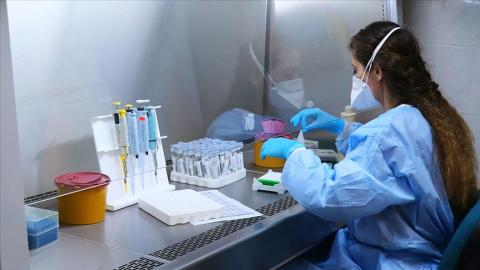 The number of coronavirus cases in Turkey has been decreasing since the introduction of weekday night curfews and weekend lockdowns, but officials are urging citizens to remain vigilant as the New Year's holiday approaches.

The number of daily cases, which peaked on Dec. 11 to 32,106, decreased to 19,103 on Dec. 21. Turkey distinguishes between daily cases and daily patients, with the latter consisting of people suffering from multiple symptoms, while daily cases could refer to those showing mild symptoms or no symptoms at all.

Health Minister Fahrettin Koca noted on Dec. 22 that the number of active and critical cases is dropping. But infections circulating within families are on the rise, he added.

The numbers declined, but health officials are raising the alarm for New Year's. Some say Dec. 31 is potentially a high risk for the spread of the virus.

"Let's not feel relief. If we implement measures, the numbers will make us happier," said Dr. Hakan Oğuztürk from Ankara City Hospital.

Dr. Sema Kultufan Turan, a member of the Health Ministry's Coronavirus Scientific Advisory Board, has warned members of the public to stay away from crowds on New Year's Eve.

On Dec. 21, the Interior Ministry banned New Year's celebrations at hotels. But people have started renting villas for the four-day curfew, daily Hürriyet has reported.

"Daily rents for the villas in...