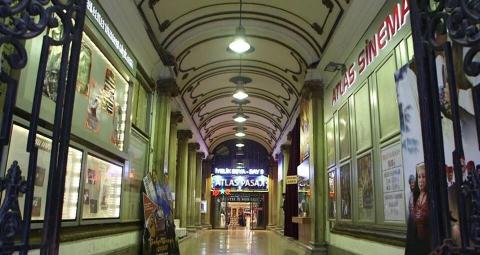 A historic movie theater on Istanbul's iconic İstiklal Avenue is scheduled to meet the public eye in the first months of 2021 as the ongoing restoration works at the theatre are close to completion.

The exhibition and arrangement work in the building has come to an end with the completion of the renovations, according to the daily Hürriyet.

A new concept, including permanent collections and temporary exhibitions, will be presented to the moviegoers, along with the Istanbul Cinema Museum in the historical building.

Plans to hold movie premieres and festival openings at the historical landmark are also in process.

There will be interactive digital units, a temporary exhibition area, a digital archive of Turkish cinema, and a collaborative study area where access to international databases will be provided in the hall.

The historical building, where the movie theater is located, was built as a winter residence by banker Agop Köçeyan (Köçeoğlu) after the Great Galata Fire in 1870.

Established in 1948, Atlas was one of the oldest operating movie theaters in Istanbul, and the passage which is giving way to the movie theater is one of the renowned meeting points of İstiklal.

The movie theater was also one of the few survivors of the glorious Yeşilçam era, also known as Turkey's Hollywood, which lasted between the mid of 1950s and 1970s.