Turkey to retaliate against any attack by Libya’s Haftar: Defense minister 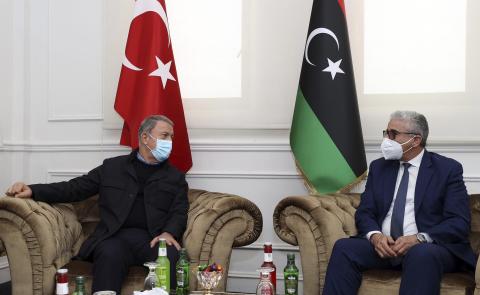 Defense Minister Hulusi Akar has warned that the forces of Khalifa Haftar and their supporters based in eastern Libya would be viewed as "legitimate targets" if they attempted to attack Turkish forces in the region.

"This war criminal, thug Haftar and his backers should know that in the event of an attack attempt waged on Turkish forces, the killer Haftar's forces will be viewed as legitimate targets everywhere," the minister said.

"They should get this in their heads. If they do something like this, they will have nowhere to run," he added.

His comments came days after Haftar said his forces would "prepare to drive out the occupier by faith, will and weapons," referring to Turkish troops operating in support of Libya's Government of National Accord (GNA).

"Everyone should contribute to reaching a political solution here. Any move other than this is wrong," he said.

Stating that the Turkish Armed Forces carried out military training, cooperation and consultancy activities within the scope of the agreement made in Libya, Akar said that approximately 3,000 Libyans had received training.

"The main problem in Libya is the coup leader Haftar and his supporters, and that's where the problem stems," he said, emphasizing that the legitimate government in Libya is the Government of National Accord that was formed under a U.N. initiative.

Pointing out that some countries emerged to be an actor of the solution after the political process has started, Akar said: "Those who were absent...