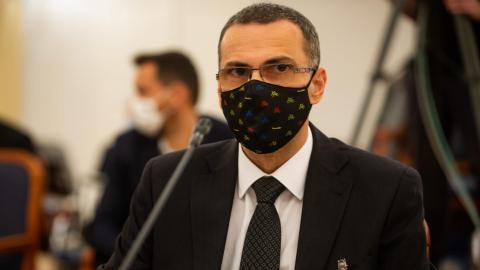 Matovic's Ordinary People and Independent Personalities (OLANO) party campaigned under the slogan "Together against the mafia". This appealed to a population wearied by a string of scandals, including the first murder of a journalist in the country's history in 2018 and the subsequent arrests of a swathe of top public officials and powerful oligarchs as part of an investigation which exposed a shocking entanglement of powerful business and political interests.

A Eurobarometer survey earlier this year showed that only 25 per cent of Slovaks have any trust in the rule of law in the country, and only 22 per cent trust the judiciary.

Public expectations are high, therefore, for Maros Zilinka, the new prosecutor general who was elected by parliament on December 4 and appointed to his seven-year term by President Zuzana Caputova on December 10.

As the head of the economic crimes section at the Office of Special Prosecution, Zilinka made his name going after multi-million-euro tax frauds committed by powerful people, including Marian Kocner, the infamous oligarch who was charged but acquitted of ordering the murder of investigative journalist Jan Kuciak. According to investigators, Kocner felt so threatened by Zilinka's work that he allegedly ordered the murder of Zilinka together with his family, though the plan wasn't carried out. Kocner denies all the charges against him.

"It is a commitment to restore public trust in justice and revive people's belief that we are all equal before the law," said Zilinka after his election.

"I want to assure the public, as well as my colleagues in the prosecution service, that I will stay true to my Zodiac sign - Leo," said the prosecutor, adding that he will act "like a lion" towards criminals, while...