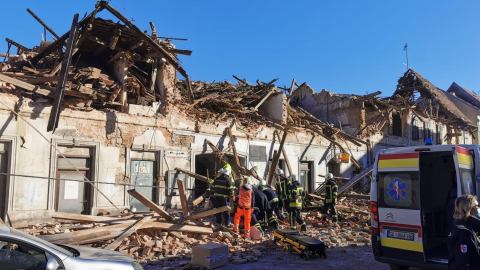 An earthquake with a magnitude of 6.3 on the Richter scale hit the Petrinja area, south of the capital Zagreb, at 12.20 on Tuesday, the European Mediterranean Seismological Centre said.

It was the largest earthquake to hit the country so far this year, with local media reporting significant damage close to the epicentre. A minute earlier, the same area had been hit by another earthquake with a magnitude of 4.2.

The mayor of Petrinja, Darinko Dumbovic, told N1 TV that "half of the city was destroyed". Media reported that a 12-year-old girl was killed. The impact of the quakes was also felt across the region.

The quakes had their epicentre close to another one on Monday with a magnitude of 5 on the Richter scale, which had its epicentre some 12 kilometres south-west of Sisak, 60 kilometres south of Zagreb, near Petrinja.

Prime Minister Andrej Plenkovic said that he would travel to Petrinja and that the government will sent all available resources to the city.

There have been a series of serious earthquakes in Croatia in 2020.

On March 22, three large quakes shook Zagreb - the most powerful in 140 years -  toppling one of the two spires on the capital's cathedral and damaging thousands of buildings. Several dozen people were injured.

Nine months after the quakes hit the Zagreb area, many of those whose homes were damaged still do not know when they...