Montenegro adopts amendments to the Law on Religious Freedom 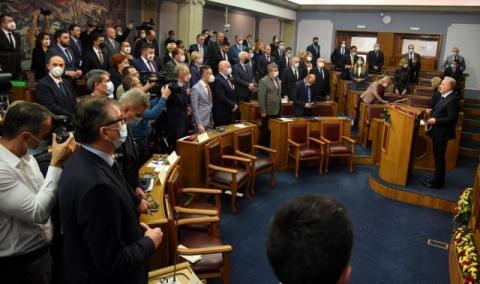 The Montenegrin ruling coalition MPs adopted the changes to the Law on Religious freedom, while the opposition boycotted the session.
All deputies of the ruling majority, 41 of them, voted for the changes, while the opposition did not attend the session, dissatisfied with the changes in the Law. The adoption of the amendments to the Law on Religious Freedom was accompanied by applause from the deputies, Podgorica's "Vijesti" reported.
DPS earlier said the changes favoured only one religious community and one nation, i.e. the Serbian Orthodox Church (SPC) and the Serbs.
The DPS also challenged the quorum of the ruling majority, because MP Maja Vukievi (DF) joined the work online, as well as due to the confirmation of the mandate of the new MP of URA GP, Suada Zoronji.
Justice and Human Rights Minister Vladimir Leposavic said the discussion on the Law lasted 365 days and that the people "almost as on referendum" demanded the changes.
The DPS supporters protested against the changes to the Law.

The Prime Minister of Montenegro, Zdravko Krivokapi, said, after the Assembly adopted the amendments to the Law on Religious Freedom, that it was a victory for the rule of law and the people.
"Despite the opposition's obstruction, violation of the Constitution and laws, the Parliament passed the changes of the Law on Religious Freedom. After a year, they corrected an injustice which the former regime wanted to bring upon the Serbian Orthodox Church (SPC), treating and using its property as its own," Zdravko Krivokapic, Montenegrin Prime Minister said in his tweet following the session.
He added the decision made all religious communities equal before the Law and that it was a victory for the legal...