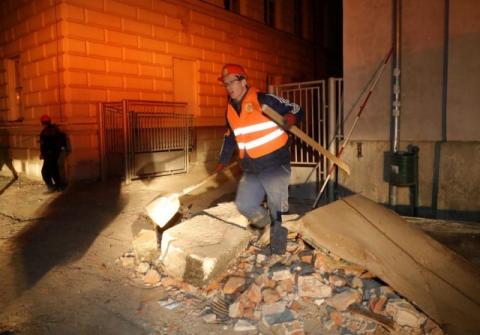 According to the latest information, seven people were killed, including two children. There are two Serbs among them, said the president of the Serbian National Council, Milorad Pupovac.
Among the victims of today's earthquake in Croatia are two Serbs and one girl from a mixed Serbo-Croatian marriage, who was the first identified victim of the earthquake, the president of the Serbian National Council (SNV), Milorad Pupovac, said tonight.
"Of the seven victims of the earthquake, five victims were identified in Majske poljane in the area of ​​the town of Glina, of which two were immigrant Croats from Bosnia-Herzegovina, and one Croat settled here from other parts of Croatia, as well as two Serbs - one young man and one elderly man", Pupovac told Tanjug.
A girl from a mixed Serbo-Croatian marriage, who was the first known victim of the earthquake, lost her life in Petrinja, Pupovac added.
The seventh victim, as Pupovac said, is an organist found in the ruins of the parish church of St. Nicholas and St. Vitus in Zazina.
"As for the damage, in some areas the damage is great, such as Majske Poljanje and the town of Glina itself, as well as the town of Petrinja and some villages in the town of Petrinja, Sisak, Kostajnica and a little less Dvor na Uni", Pupovac stated.
When it comes to Serbian institutions, the biggest damage is to the parish home of the Serbian Orthodox Church in Petrinja, where, as Pupovac stated, the renovation of the 250-year-old building, which housed the parish house, was completed a few years ago.
"There was a chapel inside. It must collapse because so much has been destroyed, now the registry books and valuable gospels are being saved", Pupovac specified. The Serbian Orthodox Church in Sisak was also...