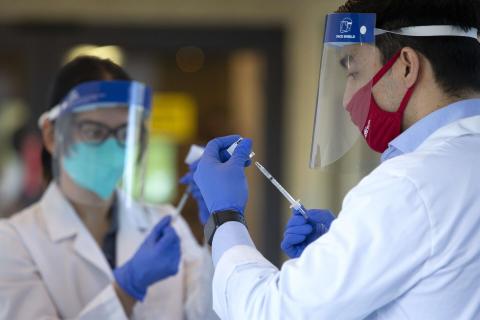 Belgium on Dec. 28 joined a growing list of countries to launch COVID-19 vaccination campaigns, while a new coronavirus variant believed to be more infectious spread further and other nations ramped up restrictions.

Israel, where Prime Minister Benjamin Netanyahu has boasted of a "world record" vaccination drive that inoculated 380,000 of its 8.7 million people by Monday, began issuing shots to soldiers at 17 centres nationwide.

While the IDF is "one of the first militaries in the world to launch a vaccination campaign for its soldiers," it will be "months" before all are protected, doctor Yael Arbel of the army medical corps said.

Just as vaccination drives gather pace, global infections have raced past 80 million with nearly 1.8 million deaths.
Fears have been raised by a new strain of COVID-19 first detected in Britain and believed by experts to be potentially more transmissible.

After it spread to several European countries as well as Japan and Canada, South Korea became the latest nation on Dec. 28 to detect the virus variant, in three individuals from a London-based family who arrived in the country last week.

Itself hard hit by the strain, South Africa became the first African nation to log one million cases, official data showed on Dec. 27.

Most European countries began their vaccination...