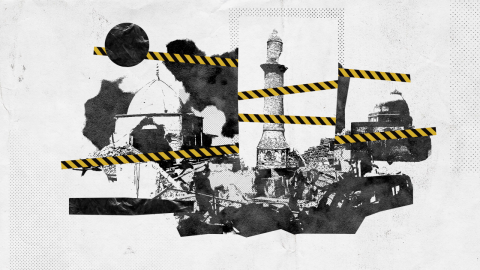 In mid-December, a group of men, some of them armed, set up a roadblock at a construction site in the southern Serbian town of Novi Pazar, where an Islamic centre was being built by the Islamic Community of Serbia.

Police intervened and the men dispersed, but the incident cast fresh light on a long-running power struggle between Muslim Bosniaks in the country and the damage it is doing to their cultural and religious heritage.

At issue that December day was control over who builds what in the name of Islam in the predominantly Muslim Sandzak region that straddles parts of both Serbia and neighbouring Montenegro.

The two similarly named Communities have been at loggerheads for years, vying for control of property, funds and political patronage.

Zukorlic, who still exerts considerable control over the Islamic Community in Serbia, denied having anything to do with the roadblock, but observers of the Sandzak power struggle are unconvinced.

They say the episode bore all the hallmarks of his heavy-handed and poorly thought-out approach to the construction, restoration and - controversially - demolition of Islamic religious sites in the Sandzak region that experts warn threatens to erase centuries of Islamic heritage stretching back to the Ottoman conquest of the Balkan peninsula.

Already a handful of 16th and 17th century mosques in Novi Pazar, beloved by residents, have been razed or subjected to shoddy renovation work under the auspices of the Islamic Community in Serbia, with...