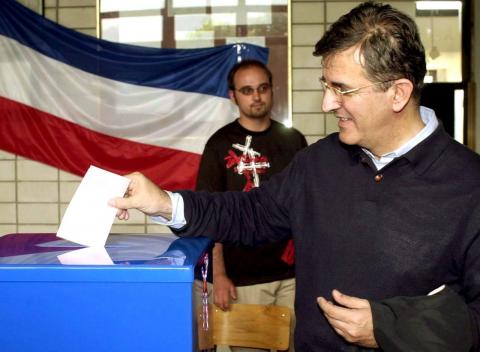 Serbia's Justice and Internal Affairs ministries have not publicly responded to fresh requests from Montenegro to extradite the former president of the State Union of Serbia and Montenegro, Svetozar Marovic.

Marovic was the only president of the loose State Union, which lasted from 2003 to 2006, before Montenegro became independent - and was once a close associate to the current Montenegrin President Milo Djukanovic.

He was arrested in Montenegro in late 2015 and signed a plea deal and was sentenced in September 2016 to three years and 10 months in prison over a string of corruption charges linked to his hometown of Budva.

He was also ordered to repay roughly a million euros.

But in 2016, he fled to Serbia to avoid serving his sentence and rermains a free man in that country.

Montenegro's Deputy Prime Minister, Dritan Abazovic, on Monday said Podgorica was renewing its push to extradite him from Serbia.

It was "extremely compromising that Marovic, who has admitted being the head of a criminal group, walks freely in another country and his son performs business activities [there]", Abazovic told a press conference.

The Serbian Justice and Internal Affairs ministries did not respond to BIRN's questions about this request, or his possible arrest, by the time of publication.

Under Serbia law on international legal assistance in criminal matters, when the Justice Ministry receives an extradition request, it forwards it to the relevant court, which in Serbia is one of the higher courts.

But the Higher Court in Belgrade told BIRN that no request for the extradition of Marovic had been submitted to the court.

Despite the issue of a warrant for his arrest, Serbian police have never detained him....