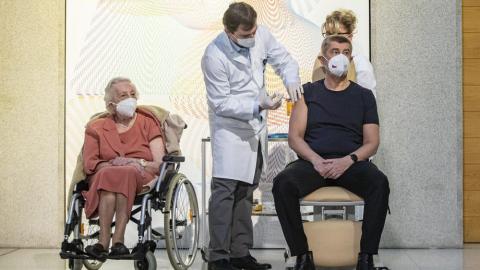 By way of contrast, Chinese pressure to stop Jaroslav Kubera visiting Taiwan took a more sinister turn when the Senate president keeled over from a heart attack. When his successor, Milos Vystrcil, embarked on the trip anyway in September, Beijing hoped to similarly scare Prague with threats of retaliation. But its attempts at intimidation backfired, producing defiance from the Czechs and international headlines cheering the small state's defence of democracy.

These episodes did little to boost Russia and China's hopes of winning the tender to build a new reactor at the Dukovany nuclear power plant - a competition viewed by many as the biggest test of Czechia's geopolitical stance for 30 years. Like their US, French and South Korean competitors, Russia and China have been hanging around Prague awaiting the call for offers for years. However, pressure on the government to block their participation due to national security concerns is growing, a debate that delayed the scheduled announcement of the tender to 2021.

Pressure on Prime Minister Andrej Babis has also centred on the use of EU funds by Agrofert, his agrochemicals conglomerate that he put into trust in 2017. EU auditors have more than once this year reported that the billionaire populist remains in control of the company and, therefore, has a conflict of interest regarding the millions in public subsidies that Agrofert receives annually.

Babis has refuted the findings and his ministers continue to hand funds to the company, despite Brussels' demand that Czechia repay huge sums. With another audit report regarding agricultural subsidies - an even bigger source of funding for Agrofert - due in the coming months, the PM's numerous conflicts of interest are set to be a major issue at the...

What if war breaks out?

Taiwan acknowledged for the first time: This will infuriate China
The Military Imbalance In The Taiwan Strait (infographic)