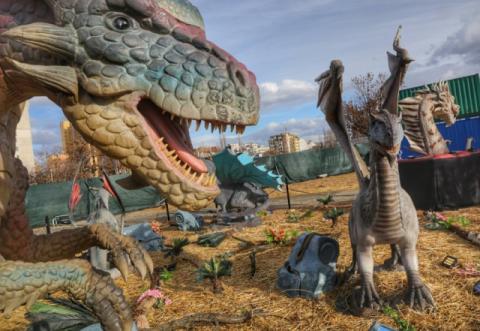 An open-area fantasy park with dragons from all over the world opened its doors to visitors in the capital's Vazrazhdane Park.

More than 20 animated dragons from fairy tales, ancient myths of the East and the West, fantasy books, movies and video games are exhibited in the built magical park in the open space.

The exhibition is interactive and animated, for example, dragons growl, move and make specific "dragon" sounds.

In addition to 24 dragons, there are 2 talking trees. The overall concept of the attraction, as well as the choice of exhibits and the layout of the theme park is the work of a Bulgarian company, part of which is Tsveti Grozdanova.

"It is an exhibition attraction that is suitable for children, families, teenagers. In fact, it is an attraction for the whole family, which presents the history of dragons and legends about dragons from around the world, "she said.

So far, the attraction has toured several countries, and in Bulgaria for the first time. For the past two years he has visited Israel, Saudi Arabia, Poland and Ukraine.