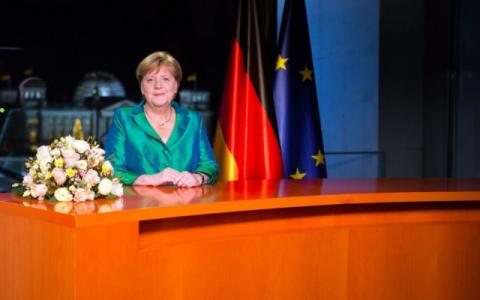 German Chancellor Angela Merkel has warned the public to stay vigilant during the "difficult" winter ahead, saying that 2020 was the toughest year of her tenure. She also confirmed she will not seek reelection in 2021.

"I don't think I am exaggerating when I say that never in the past 15 years have we all experienced such a difficult year," Merkel said in her traditional end-of-the-year televised speech.

The coronavirus pandemic was and is a once-in-a-century political, social, and economic challenge… It will be up to all of us for a long time how we get through this pandemic.

The chancellor urged everyone to stay vigilant and follow the rules against Covid-19 in order to overcome the "historic crisis," warning that the winter months ahead will be "difficult" as well. She thanked frontline workers and the general public for their work and the sacrifices made during the pandemic.

In her speech, Merkel acknowledged Ugur Sahin and Ozlem Tureci, a German-Turkish couple who co-founded the BioNTech firm, which developed the BNT162b2 vaccine in cooperation with Pfizer. The immunization campaign using the vaccine was launched in EU countries on December 27, two weeks after doctors began using BioNTech/Pfizer vaccine in Britain.

Merkel said she will get vaccinated in the future, "when my turn comes."

At the same time, she took a swipe at people spreading various conspiracy theories surrounding the pandemic. Many of them have joined anti-lockdown protests across Berlin and in other major German cities, some of which led to scuffles with police.

"Conspiracy theories are not only dangerous and untrue, they are also cynical and cruel to those who are suffering...