Merkel: A year of hope is coming 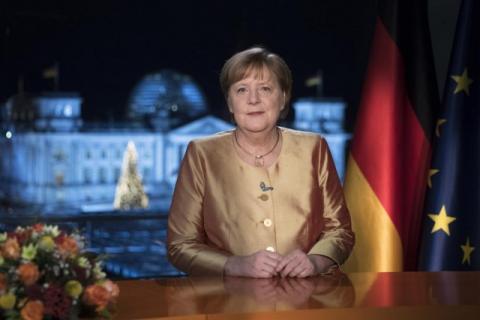 "I don't think I am exaggerating when I say that never in the past 15 years have we all experienced such a difficult year," she said in the annual address that is broadcast to millions of people.
"These days and weeks are difficult times for our country. And so they will remain for a long time," said Chancellor Angela Merkel in her probably last New Year's address to citizens in 2020, which is traditionally aired on the public service last night.
The chancellor adds that for people who grieve for their loved ones or feel the consequences of the virus themselves, it is a bitter feeling when "some irresponsible people deny the existence of the virus".
"Conspiracy theories are not only dangerous and untrue, they are also cynical and cruel to those who are suffering," Merkel said in a speech the content of which was previously provided to the media.
"The coronavirus pandemic was and is a once-in-a-century political, social and economic challenge," Merkel acknowledged. "It is a historic crisis that has demanded a great deal of all of us and too much of some of us. I know that mustering this historic effort has required tremendous trust and patience on your part, and continues to do so. For that, I am sincerely grateful to you."
Merkel says 2020 was a year in which "countless people have helped make it possible for our lives to go on through the pandemic". "In supermarkets and freight transport, at post offices, on buses and trains, at police stations, in schools and day-care centers, at churches, in editorial offices...", Merkel said.
The beginning of vaccination, as she says, offers hope.
"But I feel hope, and in recent days this hope has been reflected in the faces of the first people to be vaccinated: the oldest among us and...