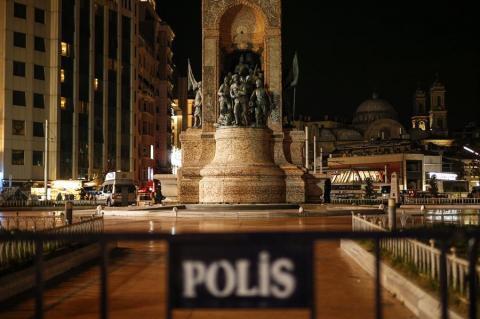 Turkey is under a nationwide curfew spanning the traditional New Year's holiday that has started on Dec. 31 until early Jan. 4 as part of measures to stem the spread of the novel coronavirus.

The curfew has begun on Thursday at 9 p.m. and end at 5 a.m. local time on Monday.

Turkey has been implementing curfew on weeknights and full weekend curfews since Dec. 5 amid measures to stem the outbreak.

Certain streets and squares are closed during the four-day curfew, with the ban also covering foreign tourists.

Famous tourist destinations including Istiklal Street and Sultanahmet Square in Istanbul, the July 15 Kızılay National Will Square in the capital Ankara and Gündoğan Square in the Aegean province Izmir, are closed from 9 p.m. Dec. 31 until 10 a.m. Jan. 1

As part of measures during the New Year holiday, security units carried out controls at over 8,300 points, including from the air and sea, according to the Interior Ministry.

Security forces deployed 113 airborne vehicles, including helicopters and drones, as well as 109 watercraft for these efforts.