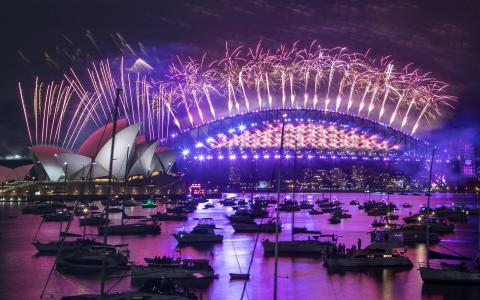 From Sydney Harbour Bridge to the Acropolis, fireworks burst in skies above eerily deserted landmarks as the world ushered in the New Year with muted celebrations and said good riddance to a pandemic-ridden 2020.

After a grinding year that has seen at least 1.7 million people die from COVID-19, fresh waves of infection have sparked renewed lockdowns and forced would-be revellers to extend their 2020 tradition of watching events from the sofa.

The eagerly awaited first seconds of 2021 fell on the Pacific nations of Kiribati and Samoa from 1000 GMT. The uninhabited Howland and Baker Islands will be the last to tip over into the New Year.

New Zealand, which has won plaudits for its handling of the coronavirus, followed Kiribati and Samoa, with large crowds gathered in Auckland to watch a fireworks display.

In Australia's largest city, Sydney, fireworks lit up the glittering harbour with a dazzling display, but few spectators watched in person.

"I think everybody is looking towards 2021 as a fresh beginning and a fresh start," Karen Roberts, among the lucky few who were allowed past checkpoints around the area, told AFP at a bar nestled under the Sydney Opera House.

Some Hong Kongers, despite restrictions, ventured out to mark the start of the year, gathering on the Victoria Harbour waterfront to take selfies.

In Tokyo, where residents face the prospect of a state of emergency being imposed after infections touched new highs, people queued in face masks to offer New Year prayers.

Elsewhere, the mood was...

Negative rapid test sufficient to enter Slovenia as of Monday
Football: Cristian Manea - We are going to make a very big surprise at the Olympic Games