Year in Pictures: 2020 in the Balkans and Central Europe 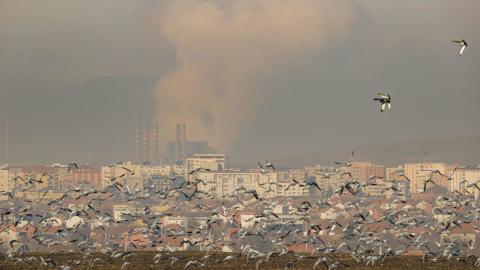 BIRN presents its selection of photos of some of the events and processes that marked a difficult year.

Battle Goes on With Deadly Virus

Since the first cases of coronavirus were confirmed in the region, all eyes were on the stability of health systems, the numbers of infections and fatalities, as well as the effects of the health crisis on the social and economic situation. The most dramatic scenes, of course, came from hospitals, where people fought fierce battles with the virus.

US NATO military jets fly over North Macedonia's capital,. Skopje on May 29, 2020, in honour of the country's admission to the NATO alliance this year. Photo: EPA-EFE/GEORGI LICOVSKI.

Following completion of the ratification procedure, North Macedonia became NATO's 30th member in March this year, with officials calling membership the most crucial success since independence. Due to the coronavirus pandemic, there was no big celebration. But US NATO jets flew over the capital, Skopje, in honour of the country's admission to the alliance.

A lone protester endures tear gas as she approached police to beg them to stop attacking protesters in Tirana, Albania on 13 December 2020. This was the fifth night of protests against the police shooting of an unarmed 25-year-old. Photo: LSA.

The end of the year was marked in Albania by protests after a police officer shot dead 25-year-old Klodjan Rasha, who...