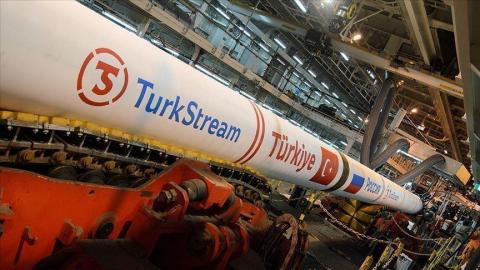 Serbia on Jan. 1 said it had begun delivering natural gas to Europe through the TurkStream pipeline and a new route crossing Turkey and Bulgaria.

The 403-kilometer (250 miles) Serbian section was commissioned in a ceremony in Gospodjinci in the municipality of northern Zabalj.

Serbia received its first shipment of gas Wednesday from the TurkStream pipeline project which connects Russia to Europe.

A week ago, Serbia held a successful test run of the project.

The commercial opening of the section of the pipeline that passes through Serbia from the Bulgarian to the Hungarian border was held as one of the first projects of 2021.

Serbian President Aleksandar Vucic said at the ceremony that the TurkStream will greatly contribute to industry and economy in the country, as well as increase Serbians' quality of life.

Vucic added that Serbia would receive gas through the pipeline at a price of up to $155 per cubic meter, with much lower transport costs than before. Also, Serbia will charge a transit tax, which will help pay for the pipeline's construction.

Meanwhile, Dusan Bajatovic, the CEO of Serbian natural gas company Srbijagas, said that up to 6 million cubic meters of gas would be brought to Serbia immediately.

Running from the eastern Zajecar to the northern Horgos, the Serbian section delivers Russian gas through Turkey and Bulgaria with a capacity of 15.75 billion cubic meters per year.

The 930-kilometer-long TurkStream pipeline will carry Russian gas under the Black Sea through Bulgaria, Serbia, and Hungary, with another section...

NATO Will Hold Military Drills on Alliances’ Southern Wing, Troops and Vehicles Will Pass through Bulgaria

Democracy Digest: A Week of Illiberal Rants, Threats to Sue And Hands Across the Aisle