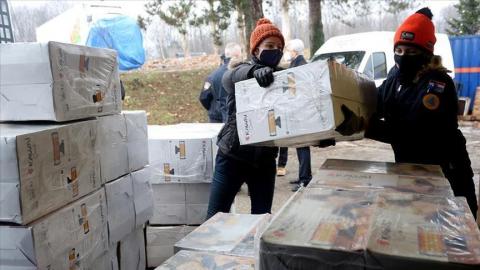 Turkey's aid to earthquake victims arrived in Croatia on Jan. 1.

The aid consisting of 272 heaters was sent by Turkey's Disaster and Emergency Management Authority (AFAD).

A powerful 6.3-magnitude earthquake on Tuesday rocked the town of Petrinja killing seven people and injuring 27 others.

Turkey's Ambassador to Zagreb Mustafa Babur Hizlan said that they were in direct contact with the relevant authorities right after the earthquake for first aid.

Hizlan said that after the talks between interior ministers it was determined that electric heaters are the most needed for the victims.

Hizlan added that AFAD will also ship 480 tents for the victims as well as container houses.

Moreover, the Turkish Cooperation and Coordination Agency (TIKA) distributed 500 blankets to the victims.

Over 40 mln people receive 1st COVID-19 jabs in Turkey
Turkish analysts: “US bases in Greece show us their barrels”

Turkey's road motor vehicle registrations up in June
Death by a Thousand Derogations: The Geneva Refugee Convention and the EU