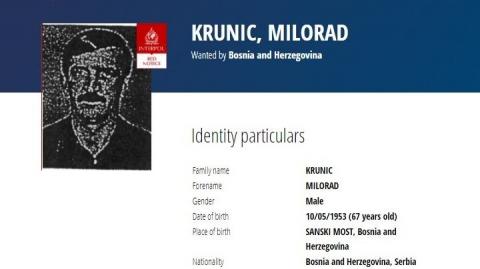 The Bosnian state court discontinued proceedings against Milorad Krunic, who was accused of committing crimes against humanity in the Sanski Most area in 1992, because he has died.

"In the case against Milorad Krunic, the court has rendered a decision to discontinue the criminal proceedings against him due to the defendant's death," the state court announced.

Interpol issued a 'red notice' for the arrest Krunic, who had citizenship of Bosnia and Herzegovina and Serbia, in October 2020 after he failed to appear for a plea hearing in August.

Krunic was charged, as a member of reservist police forces, with having committed his crime as part of a widespread and systematic attack by the Bosnian Serb Army, police and paramilitary units on the Bosniak and Croat civilian population in the municipality of Sanski Most in 1992.

"He has been charged with having participated, on June 11, 1992, while leading a group of escorts known to him, in the transportation of men from the Sports Hall and Betonirka Factory detention facilities [in Sanski Most] to the Manjaca detention camp, and the supervision of the convoy," the prosecution said when announcing the indictment.

"He separated six civilians [from the others] and participated in their murder later on. The civilians were killed with firearms on the convoy's return from Manjaca by the local road between Pavici and Hazici," it added.