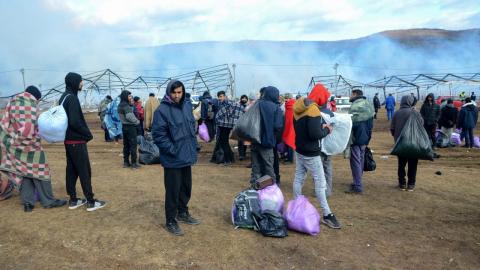 After locals in the town of Bihac in northwest Bosnia protested against plans to relocate migrants and refugees from the torched Lipa camp to the Bira centre, inside the town, Bosnia ordered its armed forces to set up new tents in the Lipa camp where the migrants can stay until the winter adaptation of the camp is completed.

Installation of new tents started on January 1, but they are not yet fully equipped. Beds and electricity are missing. Some tents are thermally insulated and can be heated, while other old army tents are inadequate for winter conditions.

Many of the migrants and refugees do not want to go back to the camp, however. When they realized they would not be transferred to Bira, some protested. They also refused food brought to them by the Red Cross for four days.

When a Bosnian government delegation, including the security and defence ministers, visited Lipa on Sunday, migrants and refugees welcomed them with protests, shouting that they do not need food but freedom and want to go to the EU.

Lipa was until the end of December last year a temporary home to migrants and refugees trying to reach Western Europe. It was in the process of being closed down by the International Organization for Migration, IOM, which had supplied most of the services, and deemed it unsuitable for winter weather.

Bosnia's authorities had promised in April to upgrade facilities to cope with the cold weather and supply utilities and road access, but nothing was done and, after repeatedly delaying closure, when the IOM went ahead with closure, an unidentified group of migrants started setting fire to the tents.

The camp was mostly destroyed. Only one tent left standing. Around 900 migrants and refugees with nowhere to go remained in...