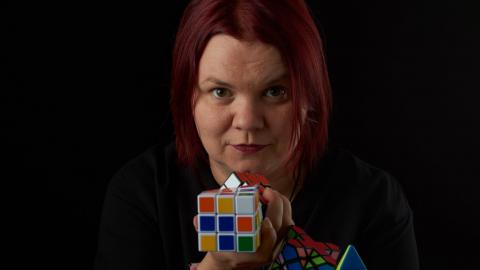 "There is no respect for slaves. And just because we all know that the slave system is not fair, that doesn't mean that it will be overthrown by the slave owners. The system suits them."

'Enemies of the state'

A Belgrader, Bogavac said she was surprised when she got the call two years ago from Sabac, some 60 kilometres west of the Serbian capital towards the border with Bosnia.

But she relished the challenge, jolted from what she described as a "self-created ghetto of Belgrade middle-class intelligentsia," part of a generation "leading an interesting life but which still hasn't done enough."

"I was unhappy with our constant criticism of the dominant cultural model but the lack of any attempt to create another," Bogavac told BIRN.

A 2018 winner of Serbia's prestigious 'Sterija' award for best contemporary play, Bogavac said she had a reputation as a 'forbidden artist'. So she was taken aback that Sabac would "want me and my ideas".

Bogavac also expressed pride in the fact that, during her tenure, there were no employment disputes that ended up in court, as was frequently the case before her arrival.

But when the Progressive Party, which emerged in 2008 from the ultranationalist Radical Party and took power in Serbia in 2012, circled Sabac as its last remaining conquest, Bogavac knew the writing was on the wall and that her achievements in theatre, film, literature and music would not help her.

"What we are witnessing is the formation of two classes,"...