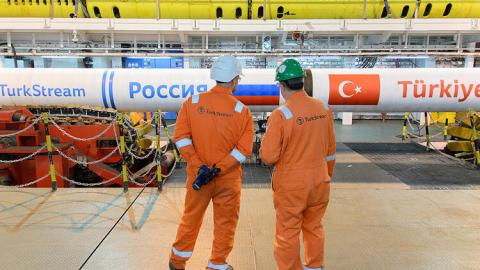 Over 5.8 billion cubic meters (bcm) of Russian gas transferred to Europe from Turkey via TurkStream natural gas pipeline in 2020, according to industry sources on Jan. 3.

After the first gas flow started in January, Russian natural gas was transferred to consumers in Bulgaria, Greece, Macedonia and Romania.

Commercial supplies via the gas pipeline commenced on Jan. 1, 2020.

TurkStream consists of two 930-kilometer-long offshore lines stretching from Russia to Turkey across the Black Sea, and two separate onshore lines with 142 and 70 kilometer-long.

The project has a total capacity of 31.5 bcm. The first line with a capacity of 15.75 bcm is designated for supplies to Turkey's domestic customers, and the second line, with another 15.75 bcm capacity, carries Russian gas further to Europe through Bulgaria.

The project's gas receiving terminal in Kiyikoy, Turkey's main onshore section, was constructed by the South Stream company, which is owned by Gazprom.

Two onshore lines of the project carry gas from the receiving terminal inwards.