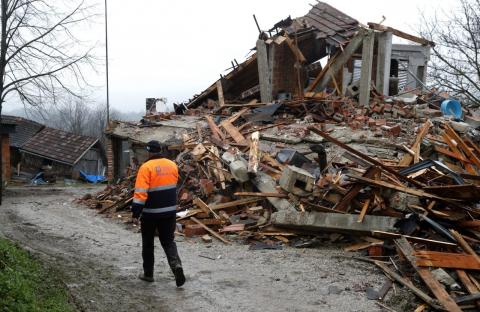 The Croatian Office for the Suppression of Corruption and Organised Crime, USKOK, announced on Monday that it will instruct the police to investigate suspicions of possible negligence and other failings during the post-war reconstruction of buildings that were badly damaged by the powerful earthquake that hit the Banovina area of Sisak-Moslavina county in central Croatia last week.

Prime Minister Andrej Plenkovic said earlier on Monday that he wants to know why some houses built after the 1991-95 war were of poor quality.

"I think it is necessary to examine how and why this happened, who worked [on the reconstruction], who was the supervisor, and who gave the final-use permits for the buildings," Plenkovic told media.

A series of earthquakes hit central Croatia last week and the strongest, on December 29, with a magnitude of 6.4 on the Richter scale, demolished many buildings in the towns of Petrinja, Glina, and Sisak and surrounding villages and killed seven people.

During the war, the Banovina region became a part of the unrecognised rebel Serb-led Republic of Serbian Krajina. Croatian forces regained the territory controlled by rebel Serbs in 1995's Operation Storm.

Locals returned to the area after the war and the state rebuilt their war-damaged homes, but the region is still impoverished and inhabited mainly by elderly people.

The issue of post-war reconstruction became topical days after the quake when people whose homes were hit complained to reporters that their houses had not been adequately repaired or rebuilt after the 1990s war.

One of them, Tomislav Stanic, whose house in the village of Strasnik was rebuilt after the 1990s war, told N1 television on Monday that "the state renovated 80 per cent of houses...