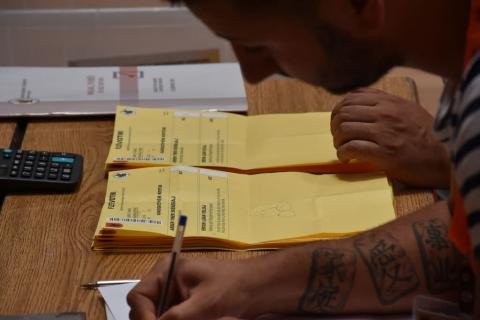 The idea is to reduce the possibility of people voting under the name of absentee voters - a major problem in Albania, where up to 40 per cent of the voters are believed to be abroad.

"The Commission is reviewing the offer and the equipment offered for testing purposes," the Central Election Commission, CEC, stated.

Albania is heading towards parliamentary elections on April 25. If the new system is ready by then, electronic readers will check biometric data on IDs or Passports to make sure voters are voting in person.

In previous elections, there have been allegations of voting manipulation by commissioners filling in voter registers with the data of voters who are either abroad or not participating in the election.

Last July, Albania's Special Prosecution Against Organized Crime and Corruption, SPAK, ordered the arrests of some 22 commissioners in three voting centres in the Shijak area in central Albania.

An investigation revealed that some 5.5 per cent of the votes cast in these centres were signed by voters who were outside Albania on the day of the 2017 parliamentary elections. SPAK was later ridiculed, however, when media discovered that two of the commissioners were already dead.

Its investigations into the case were part of a larger controversy related to another investigation, named File 339/2016 - a massive probe that discovered how drug dealers were collecting votes for the Socialist Party of Prime Minister Edi Rama through voter intimidation and pay-outs.